Our trucks drive more than 50,000 miles a day total to serve our customers.

Our call center takes an average of 2,770 calls per day.

More than 7,000 customers use Web Link, our online ordering system.

On average we sell tires to about 2,100 customers per business day.

Having good tires with sufficient tread depth is crucial for driving safety, particularly in wet or snowy road conditions.

Check the tread depth of your car tires by inserting a penny upside down into a tire groove. If you can see above Lincoln's head at any point, start shopping for new tires. 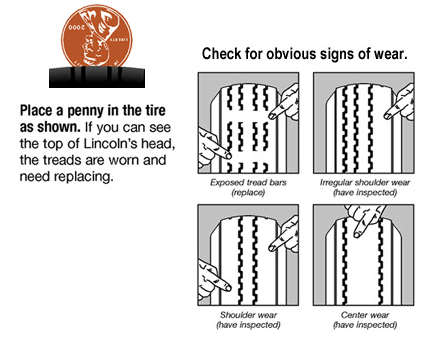 Many of us will claim that we can reel-off interesting and fun facts about cars, but do you know any really obscure and ultra-specific facts that would leave hardcore petrolheads agape? No doubt you are sifting through your mental backlog trying to think of some, but no need, we have put together a top ten cheat sheet of interesting car facts you probably don't know.